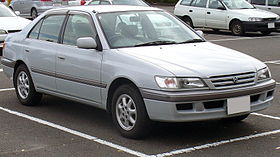 The Toyota Corona is an automobile manufactured by the Japanese automaker Toyota between 1957 and 2002. Traditionally, the competitor from Nissan was the Nissan Bluebird. The word Corona is Latin for “crown”, a reference to an earlier vehicle Toyota offered called the Toyota Crown. It was exclusive to Toyopet Store dealership channels in Japan, while the larger Crown was available only at Toyota Store locations.

In many countries, the Corona was one of Toyota’s first international exports, and was shortly joined by the smaller Toyota Corolla, providing buyers with a choice of a larger car, with similar operating expenses to the smaller Corolla. The Corona was Toyota’s second sedan in their hierarchy of products, just below the Crown, until 1968 when the Corona name was used on a larger, all new platform called the Toyota Corona Mark II, which gave buyers more interior space while still offering dependable, affordable performance.

The Corona became successful in export markets and was marketed under a number of different nameplates worldwide—including those branded in much of Asia as Coronas marketed in European markets as Carinas. While the Corona is no longer in production, the Toyota “T” platform used to build it is still being used.