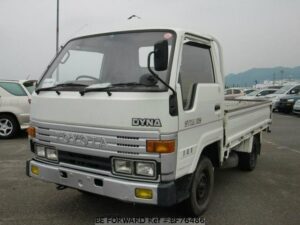 The Toyota Dyna is a medium-duty cab over truck for commercial use. In the Japanese market, the Dyna is sold alongside its twin called the Toyoace. The Toyoace was a renaming of the Toyopet SKB Truck as a result of a 1956 public competition with 200,000 entries.  “Dyna” is short for dynamic.

In Japan, its traditional competitors are the Isuzu Elf, the Mitsubishi Fuso Canter and the Nissan Atlas.

The Toyota Dyna has a gross vehicle weight of up to 3.5-tonnes with a maximum payload of 1.5-tonnes and is available in both single cab and two cab configurations. Moreover, the Japanese LCV is also available as a dropside truck or in tipper form being suited to carry all sorts of loads. The Toyota Dyna has a starting price of 20.447 euro with service intervals set at 20,000 miles and a three-year/60,000-mile warranty.