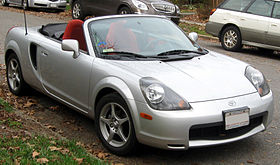 The third generation MR2 had three different names, depending on country; Toyota MR-S in Japan, Toyota MR2 Spyder in the US, and the Toyota MR2 Roadster in Europe. With the previous MR2 having been in the market for almost ten years, the newest MR2 took a drastically different approach than the outgoing model. The new MR2 was a part of Toyota Project Genesis, a plan to attract buyers from the younger age bracket in an effort to increase sales in the US. The most obvious change was the switch from a hardtop/open-roof option to a true convertible soft top, giving the car the ‘Spyder’ designation.

Many claim that this car was inspired by Porsche Boxster which was released in 1996, due to its similar appearance. However, the first prototype of MR-S appeared in 1997 at the Tokyo Motor Show, which had slightly more angled and rigid appearance than the current production model, which included additional curves for a more aerodynamic and appealing look. The MR2 Spyder chief engineer Harunori Shiratori said, “First, we wanted true driver enjoyment, blending good movement, low inertia and light weight. Then, a long wheelbase to achieve high stability and fresh new styling; a mid-engine design to create excellent handling and steering without the weight of the engine up front; a body structure as simple as possible to allow for easy customizing, and low cost to the consumer.”