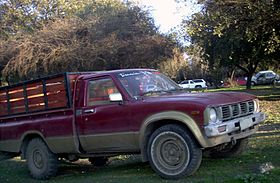 Modernized in March 1979, the 1.5-ton Stout now used the front pressings of the smaller Hilux but still fulfilled the same role as before. The bed used the same pressings as for the previous Stouts, meaning that there was a pronounced difference between the front and rear bodywork. The RK110 also continued to use the same 1,994 cc 5R engine, although export versions were also available with the 2.2 litre 20R engine.  The Stout underwent a light facelift in January 1982 and became the RK111.

Body styles included a pickup (two-door, three-seater) and a double-cab pickup (four-door six-seater). The Stout was discontinued in 1986 without a successor,as Toyota’s first full-size pickup, the T100 (as well as the later Tundra) were built mainly for North America, where the Stout had been replaced by the Hilux in 1968. In Japan, the third generation Stout saw very limited sales, as trucks in this weight class were nearly always of a cab-over design. Most third generation Stouts were exported.  The double cab version was retired in July 1985.  Stout production came to a final halt in March 1989,although there are indications that production continued until as late as 2000. These later versions (YK110) are supposed to have received the 4Y engine.