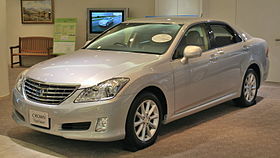 The Toyota Crown is a line of mid-size luxury sedans by Toyota. The range was primarily available in Japan and some other Asian countries. Throughout the Crown’s production, there has always been available a minimal-content Crown in the sedan bodystyle platform used as a taxi, and in the mid-1990s, Toyota created an offshoot of the Crown sedan to serve specifically as a taxi, called the Toyota Comfort. The Crown also serves as a police car nationally, as well as transporting government officials at all levels.

In Japan, it is only available at Toyota Store dealership retail channels. The Crown is Toyota’s oldest sedan still in production. It is outranked only by the Century and the Majesta in social status. The Crown is used by many Japanese companies as the company limousine. In many markets the Crown had become very expensive and was replaced by the Cressida in some international markets when it became available for export in the early 1980s. Most models are distinguishable by a unique “Crown” badge on the front grille, in place of the normal stylized ‘T’, but the normal Toyota badge is usually used on the rear.

It was sold in the United States during the late 1950s and up until 1971. Exports to Europe began in 1964 with the first cars going to Finland. Other European countries which saw imports of the Crown included the Netherlands and Belgium. The United Kingdom was another market until the early 1980s. It was also exported to Canada for a few years—1965–68. Australia was another important export market for the Crown—to the extent that it was manufactured there from the mid-1960s until the late 1980s using many local components. Trinidad and Tobago was also another country where the Toyota market had a successful run, which saw some productions between 1960 and 1980.

The Crown was introduced in 1955, and Toyota subsequently used the “Crown” name as inspiration for their primary sedans, the Corolla which is Latin for “small crown”, the Camry a phonetic transcription of the Japanese word kanmuri that means crown, and the Corona which is Spanish for crown.