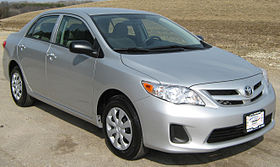 The Toyota Corolla is one of a line of subcompact and compact cars manufactured by the Japanese automaker Toyota, which has become very popular throughout the world since the nameplate was first introduced in 1966. In 1997, the Corolla became the best selling nameplate in the world, surpassing the Volkswagen Beetle. Over 39 million Corollas have been sold as of 2012. The series has undergone several major redesigns.

The name “corolla” is part of Toyota’s naming tradition of using the name Crown for primary models: the Corona, for example, gets its name from the Latin for crown; Corolla is Latin for small crown; and Camry is an Anglicized pronunciation of the Japanese for crown, kanmuri. The Corolla has always been exclusive in Japan to Toyota Corolla Store locations, and manufactured in Japan with a twin, called the Toyota Sprinter, sold at a specific Japanese Toyota dealership called Toyota Auto Store, then renamed Toyota Vista Store in 1980.

The Corolla’s chassis designation code is “E”, as described in Toyota’s chassis and engine codes.