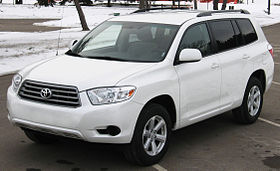 The Toyota Highlander/Kluger is a midsize crossover SUV produced by Toyota. It is built on the platform of the Toyota Camry.

Announced in April 2000 at the New York Auto Show and arriving in late 2000 in Japan and January, 2001, in North America, the Highlander became the first car-based midsize SUV or midsize crossover. The Highlander is the crossover counterpart to the more rugged, truck-based midsize 4Runner and became Toyota’s best-selling SUV before being surpassed by the smaller RAV4 in 2006.

Unable to use the Highlander name in Japan and Australia because of a trademarked Hyundai Terracan trim line, Toyota calls the vehicle the Toyota Kluger (Toyota Kuruga) (pronounced Klu-ger) there, the name derived from the German word klüger, which means clever or wise.